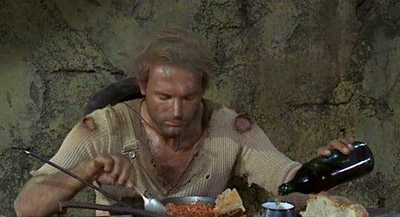 In 'They call me Trinity' we see you eating beans for the first time in a movie, then they became 'famous' and a feature in most of your films...
Yes, I had to eat a lot in this scene... By the way, I still like to eat beans today! The audience enjoyed that scene so much that I had to keep eating them in following movies...

What are the ingredients of the original bean-dish?
It is spicy! For the sauce you need chili peppers, olive oil, tomato sauce, onions, salt and a lot of pepper! Fry the onions in olive oil in a saucepan, add the remaining ingredients and cook until the beans are tender. 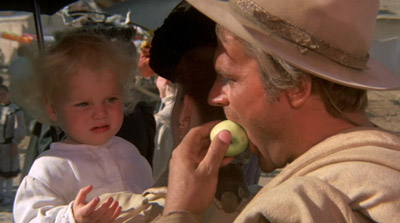 In 'My Name is Nobody' you steal an apple from a little girl. In 'Troublemakers' you give an apple to a girl and we see you eating apples in many movies, even in 'Don Matteo'. What is the story behind that?
The apples in 'My Name is Nobody', 'Troublemakers' and the other movies - that was my idea. I just like apples, I eat them all the time. I always have apples in my pocket. They are very healthy! Do you want one?

Tell us about the famous punch that we see in your movies with Bud.
It's called the 'Pigeon Punch' in Italy. The punch - Bud hits me on the head with his fist and I don't fall straight down but jump up in the air a little and then fall down flat - like a pigeon that has been shot! That's why it's called the 'Pigeon Punch'. When Bud and I were rehearsing one of our first fight scenes, we were discussing how to actually do the punches. Bud invented the part where he throws a punch with his fist on the head and I invented the part where I jump up and fall down.

Do you still have any of the clothes from your movies?
I still have the hat from 'My Name is Nobody'. That hat was very hard to find, Sergio Leone was very particular about the hat. We went to many theater-costume stores together until we found the right one. 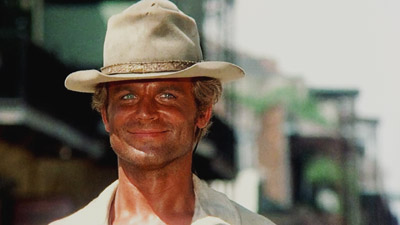 Many people ask us if Bud Spencer also starred in 'Vacanze col gangster'?
Many people asked me the same thing! But no, he was not in this film.

Tell us about the movie 'Blackie the pirate' in which you do some great fencing scenes. Did you learn how to fence for this movie? 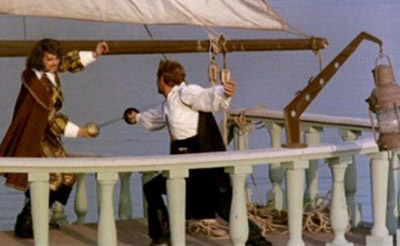 I took private fencing lessons when I was 15 so I could fence already. 'Blackie the Pirate' was made inbetween 'They Call Me Trinity' and 'Trinity Is Still My Name', but before 'They Call Me Trinity' had actually been released in movie theaters. That explains why it seems to be different from our other movies.

Many of your fans consider you to be a 'hero'. Did you have a hero when you were young?
Yes. My hero was James Dean - in the movie 'Rebel Without A Cause'.
Choose your prefered language:
English | Italiano | Deutsch | Français
Visit Terence Hill on