Official Website
Q&A - questions from fans
Do you have a question? Send us your questions through the Terence Hill Official Facebook Page.
From time to time new questions and answers will be added on this page.
How many times did you shoot the scene where you eat the huge amount of beans at the beginning of the movie 'They Call Me Trinity'?
Only once! I didn't eat anything for 24 hours before shooting that scene so I would be really hungry and able to eat the whole lot, so we could only shoot it one time. 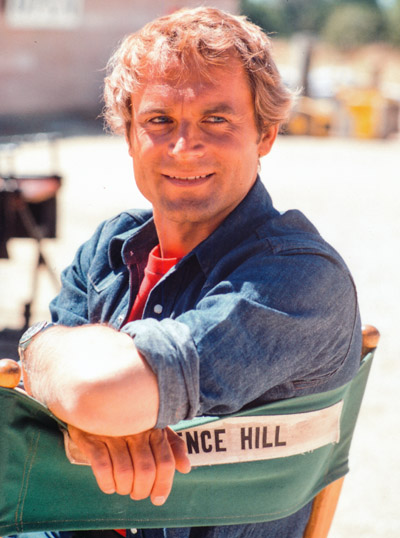 When did you learn horse riding? When you started filming or when you were a child?
I started horse riding when I was a child, when I was 12 years old.

Do you have any advice for young people who want to become actors?
I think it's important to visit an acting school, so I recommend that to anyone who wants to be an actor!

The scene of the car race at the beginning of the movie 'Watch out, we're Mad', was it shot in Germany?
No, that car race was filmed in Italy.

In 'Mr. Billion', you are in a bar in a small town which is supposed to be in Texas. Was it shot in Texas?
The scenes of the small town with the bar where we fight were filmed in Arizona actually. 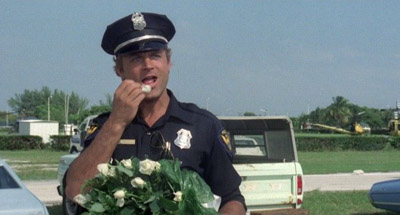 There is a scene in 'Super Fuzz' where you eat flowers, while you give the bad guys a funny roadside test. Were they real flowers or candy ones?
They were real flowers! It won't hurt you to eat flowers, they're plants - but better don't try that yourselves!

In 'Super Fuzz' is also a scene where you make a cup move from a counter into your hand. How was that done?
I believe that was done with a piece of string attached to the cup.

In the movie 'I'm for the Hippopotamus', you release wild animals. Was it yourself inside the barriers with the lions?
Yes, it was me. The animal trainer gave me a stick and told me to be careful not to fall down, because the lions would have attacked me if I would have fell. So I walked really slow! I realized later that it was actually quite dangerous! 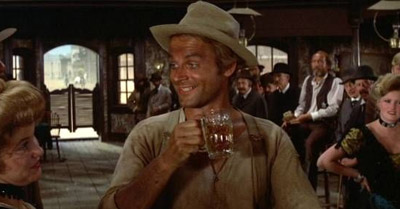 The famous saloon scene of 'My Name is Nobody', where you drink several glasses of Whiskey, then shoot the glasses for a bet, is fantastic. What was in the glasses?
It was water mixed with real Whiskey. I wanted the scene to be realistic, so I really drank Whiskey while shooting that. It did go to my head as you can see in the scene!

Watching your movies one gets the impression that you can do anything: Riding motorbikes, horse riding, roller skating, fencing... Is there anything that you can't do?
Well, I had to dance the Tango once, I couldn't do that very well!

How long did it take to film the final fight scene in 'They Call Me Trinity'?
It actually took 10 days to film this scene.

How do you call Bud on the set, Bud or Carlo?
Bud.. Carlo... sometimes Bud but most of the time Carlo!

Where did you film 'Watch out - we're Mad'? This movie was made in Madrid/Spain. The car race at the beginning of the movie was filmed in Italy.

You wear a necklace with a silver cross in many movies like 'Superfuzz', 'I'm for the Hippopotamus', 'Go For it', 'Who Finds a Friend Finds a Treasure' and 'Double Trouble'. Is it your own and was it a coincidence that you wore it in several movies?
Yes, it is my own necklace and it was a coincidence that I wore it in those movies, it wasn't planned. 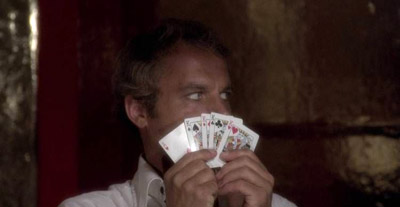 You show some great card-tricks in your movies, are you really such a good card player?
I can do some card tricks but the hard ones were done by someone else.

Why did you make so many movies in the Miami area?
It's a nice place, the weather is always good and there's everything you need to make a movie.

In 'Go For it' you are on a ship fighting the 'bad guy' K1. Was this filmed on a real ship or in a studio?
This was filmed on a real cruise ship during a cruise from Miami to the Caribbean! There were even passengers on board.

Did you ever make a TV commercial?
Yes, at the beginning of my career I made one for an Italian beer company.

Bud is a pilot - did you ever fly with him?
Yes, I did. I had to go from North Italy to Rome once and Bud took me there by plane, we flew from Parma to Rome!

Did you appear in a movie called 'The Revenge of Ivanhoe'?
No, I didn't.

Your first movie was 'Vacanze col Gangster'. How did you get this part?
That’s quite an interesting story: A friend of the family had heard or read about the casting for this film and that they were looking for five young boys. At the same time, the assistant of the film's director was in my swimming team, so I would meet him at practice. He told me to go to the casting too. I went there and got the part!

Do you play a musical instrument?
No, I don't.

What exactly did you study at University?
I studied Literature. Actually, the class was called 'Literature and Philosophy'. After I made the film 'The Leopard', I decided to leave University. 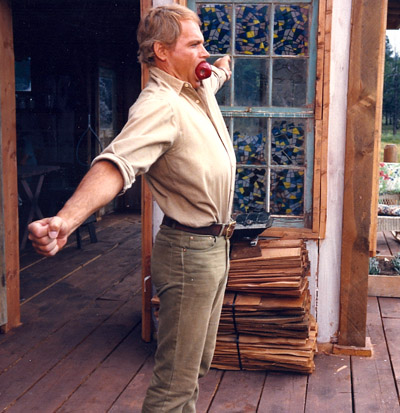 Did you ever take acting lessons?
Yes. When I was 15 years old, I took lessons at the Actor’s Studio in Rome for 3 years and later in the 70s at the Actors Studio in Sheffield, USA.

Is there a city you like more than others?
I liked being in San Francisco during the 'Mr. Billion' shoot. Maybe not only because I like the city, but the whole time we spent there filming the movie was nice.

How do you manage to stay fit?
I have good genes and I always did some sports, I grew up with gymnastics and I run.

You also did some rowing?
Yes, I really love rowing. In fact, I did that when I was around 18, in a team in Rome called 'Tevere Roma'. I won a silver medal once.

Do you have pets or other animals like horses?
No, I don’t have any animals. If you have horses, you have to ride them every day. Unfortunately, I don’t have time for that.

There’s a scene in 'Lucky Luke' where you’re lying next to a lion. Did you do that scene yourself?
Yes. The lion was from Colorado - it was a wild lion, not a tame one. Pieces of meat were placed around me and I was told to stay very still and pretend to be asleep, so the lion wouldn’t attack me. In the end, the lion attacked the camera and then ran away - towards the saloon!

Did you meet Bud Spencer during the filming of 'Hannibal'?
No, we never met while filming this movie. We were never in the same scene. The first time we met on a movie set was while filming 'God forgives, I don't'!

You have worked with many great directors. Which ones did you like working with the most?
Sergio Leone and E.B. Clucher. Oldoini makes me feel very free and taken care of. I change completely when I am working with him.

If you wouldn't have become an actor, which profession would you have chosen?
Actually, when I was young, I wanted to be a pilot. Not for a commercial airline but on a jet plane like an F16. 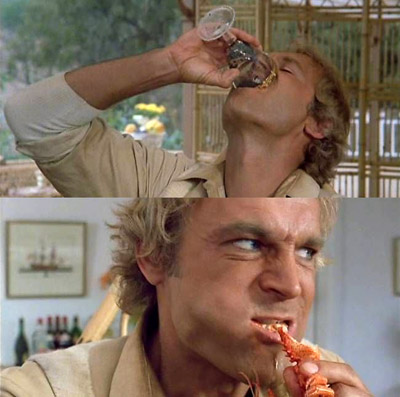 Where did you film 'I’m for the Hippopotamus'?
The movie was made in South Africa, in the Johannesburg area and the animal scenes were shot in a park near Pretoria.

There is a scene in that movie where you eat a Lobster...
Yes, that was funny. A fake lobster was made for me to eat but it just didn’t look real in the end. So we had to use a real lobster. I took big bites out of it and then the camera would stop so I could spit it out. We kept doing that during the whole scene, I’d take a bite and spit it out!

And the scene where you mix caviar, butter and champagne - were they the real ingredients?
Yes, I think it actually was real! I drank it all!

You are considered to be a quiet and reserved person, but you have played so many funny and outgoing roles. Was it difficult for you to portray characters so different from yourself?
No. For the first time, I did that in 'They Call Me Trinity'. I had fun doing it and I didn't know that I would be funny, only a little ironic maybe. The funny side is repressed inside myself somehow, but it was always there. I think it's from my mother's side, she was always funny and making jokes, so I didn't suffer at all! When I get together with Bud, something just clicks and we are funny.

You had to change your name for the western 'God Forgives I don't' in 1967. You must have heard this question many times before, but where does the name 'Terence Hill' really come from?
Well, the truth is that I was given a list with 20 names and 24 hours to choose a name from it. Terence Hill was one of them. I liked the sound of the name and the initials are the same as my mother's, that helped my decision too. 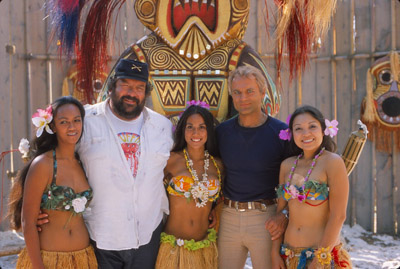 Your German fans would like to know if you speak German?
Yes, I do. German was my first language and I spoke it until I was around 6 years old. Still today, many words mean more to me in German than in any other language.

Did you ever win any medals for swimming?
Yes, I swam for a team in Rome, called 'Lazio'. I started when I was 12 years old and I won a bronze medal in junior frog swimming. Actually, I have a really good story here: During swimming practice, I would often meet Bud Spencer, who also swam for the same team. I admired him because he was a very good swimmer, but I have to say that he was quite lazy during practice! He would jump in the water and paddle around. I'm sure that if he would have trained more, he would have won the Gold Medal at the Olympic Games.
Choose your prefered language:
English | Italiano | Deutsch | Français
Visit Terence Hill on